Uwaaaaah! That is such a spoiler!
This article contains plot and/or ending details for Pandora Hearts.
Read at your own risk.

Glen (♀) was described by Levi to have been rather masculine, which confused Levi - as he found himself unaware that she was a woman until after he started to grow attracted to her. Levi also mentioned that Glen (♀) had blonde hair when he reminisced about how he's usually not attracted to women with dark hair, though Lacie was an exception to this.

Although not much of Glen (♀)'s personality has been revealed, Levi did mention that she was rather masculine, both in appearance and personality, which showed through her cross-dressing. Levi also pointed out how his master flat-out denied him every time he tried to pursue his feelings for her, though this was likely because of how inappropriate Levi was being moreso than general cruelty. Glen (♀) also seems to have been rather aggressive and tempermental, as she eventually grew so frustrated with Levi that she beat him on one specific occasion.

After taking Levi and his associated Child of Ill Omen in as her valets, Glen Baskerville (♀) took to preparing the Succession Ceremonies of Glen Baskerville for Levi right away. As Glen (♀) often cross-dressed and appeared masculine, it took Levi quite some time to realize that his master was actually a woman. Even so, Levi quickly grew attracted to his master, and even attempted to pursue this attraction on numerous occasions, only to be rejected everytime and beaten by her on one occasion. As such, nothing ever came from Levi's attraction to Glen (♀).

Over the course of about twenty years, Glen (♀) orchestrated Levi's Succession Ceremonies and successfully transfered each of the Black Winged Chains to Levi. Soon after she oversaw Levi using the power of his new Chains to summon forth the Chains of Condemnation and cast his associated Child of Ill Omen into the Abyss. About a month after, Glen (♀)'s body wore down, her soul eventually joining with Levi's alongside at least two other past incarnations of Glen Baskerville, while her body mutated into the form of a new Chain as a result of the high levels of Abyssal energy left within it.

Over time, Levi was succeeded by Oswald, and as such Glen (♀)'s soul joined Oswald's soul with Levi and the other Glens. However, when Oswald was meant to be succeeded by Gilbert, the Succession Ceremony was interrupted by the Tragedy of Sablier, during which Oswald was murdered. Thusly, Glen (♀)'s soul was included in The Rule of 100 Cycles, regaining a vessel when Leo was born one-hundred years later. 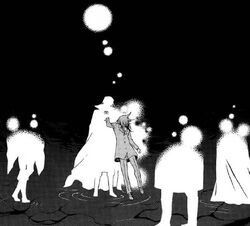 Throughout Leo's life, Glen (♀) would speak with him, whispering to him through his mind alongside the other Glens. Eventually, Leo denied their existence, and so Glen (♀) fell silent. It wasn't until Leo found himself unintentionally seeking the Glens' guidence after his friend, Elliot Nightray, was mortally wounded by Humpty Dumpty that Glen (♀) returned with Oswald, Levi and the two Glens that came before her. Glen (♀) didn't take action to help Leo herself, allowing Levi and Oswald to show him the light, Levi suggesting that Leo have Elliot form an Illegal Contract with Humpty Dumpty to seal his fatal wound temporarily. Following this, it is unknown what, if any, impact Glen (♀) had on Leo.

None of Gryphon's unique individual abilities have been revealed as of yet.

Though Glen (♀)'s relationship with her successor hasn't been explored through their physical interactions, Levi did mention that he used to be attracted to her. Unfortunately for Levi, Glen (♀) didn't seem to return the feelings of attraction (be it because she wasn't attracted to him or because it was inappropriate), and so she often denied Levi's attempts to make something out of their relationship. Outside of her frustration toward Levi's persistence, it is generally unknown how the two related to one-another, though it seems as though Glen (♀) preferred that they kept their relationship strictly business.

Glen (♀) has never been shown to interact directly with Leo, however Leo has mentioned in the past how all of the past incarnations of Glen often whispered their thoughts and feelings on certain matters to him prior to his rejecting of their existences. Thusly, it can be assumed that Glen (♀) has what's within Leo's best interest in mind and makes suggestions based on maintaining the balance with the Baskervilles in relation to society.

(*) - Denotes that the character did not appear physically, but as a part of another character's memories.

Retrieved from "https://mochijun.fandom.com/wiki/Glen_Baskerville_(♀)?oldid=67067"
Community content is available under CC-BY-SA unless otherwise noted.