Shade is the title of the ninety-ninth chapter of Jun Mochizuki's Pandora Hearts.

Uwaaaaah! That is such a spoiler!
This article contains plot and/or ending details for Pandora Hearts.
Read at your own risk.

Oswald is shocked to see Jack arrive at the tower. Jack grins maliciously and summons Oz in full, having Oz slash through his target, which appears to be Alice. Fortunately, Oz's claws go right through Alice and instead make contact with the past incarnation of Oswald.

As Oswald is jolted to his knees, he voices his surprise to see Jack there with him. Alternatively, Jack says that he thought he might find Oswald at the tower, noting the blood covering Oswald's clothes and establishing that it came from other people - which Jack claims is an awful thing for Oswald to have done. Oswald simply tells Jack that he doesn't want to hear his babble, launching himself at Jack - only to have Oz step forward to take Jack's place in battle instead. With Alice and Oswald fixated on the ongoing battle in the past, Levi explains the situation to Leo, revealing that all of the Black Winged Chains are out mending the Chains of the World at this point, so Oswald really stood no chance against Oz.

Both Alice and Oswald contemplate stopping Jack then and there, though they both decide not to - Oswald knowing that it would change history too much, and Alice knowing that it would result in the eradication of both her own existence and B-Rabbit's. Instead, Alice makes a run for the tower, only to be followed by Oswald. Fortunately, Cheshire dives in front of her in order to block Oswald's path, allowing Alice to carry on to the tower.

As Oswald and Oz spar, Jack asks why Oswald is so angry, to which Oswald insist that Jack already knows the answer, though Jack denies such a thing - as he only ever wanted to grant Lacie's wish. Managing to break past Oz, Oswald asks Jack if he's really willing to destroy the world without a second thought for something so trivial. In response, Jack merely says "yes", and has Oz pin Oswald's body to a nearby tree.

Jack decides that his behavior must seem odd to Oswald, and so he explains that Oswald was really spot on when he told him that the existence of Jack Vessalius is here, but also nowhere. Elaborating, Jack reveals that over the course of his 8 year separation from Lacie, he'd learned how to trick people in order to effectively win them over and use that trust as a weapon. Additionally, if one were to ask those people about him, they would be able to elaborate on all the filthy things Jack had done in order to get where he is. Only, by engaging in such gratuitous acts so carelessly, Jack began to lose his identity - leaving unsure of what "face" he was wearing now - and though he was able to fool others to this notion, Jack also managed to make himself blind to his misplaced identity.

Continuing, Jack tells Oswald that he thinks of him as his closest friend, and of Gilbert and Vincent as people he needs to protect, however he's unsure whether or not that's really what he feels or if it's just him trying to "play pretend" again. In order to justify his question, Jack mentions how he's used Vincent without hesitation, attacked and abandoned Gilbert and now intends on killing Oswald because he stood in his way.Oz then raises the hand that's not holding Oswald, ripping into Oswald's chest with his claws and sending Oswald's body to the ground; something which distracts both Alice and the present form of Oswald. Though Alice is pained by what's happening as she relives the happy memories she has of her time with her uncle, Alice forces herself to push on into the tower in order to accomplish what she came for.

With Oswald laying at his feet, Jack admits that he was scared to not know exactly what he was, and because of that he came to detest Lacie. He hated that they met, he hated that Lacie "saved" him, he hated the words she said to him, the song she sang, all of it, because they were the chains that bound him. Although, since Lacie could make him so angry, Jack grew to realize that she helped him identify himself. The pain that she made him feel when she wasn't by his side and the overwhelming comfort Jack felt when they reunited, it all made him feel so alive. Proclaiming that he wants to live, Jack justifies that he needs Lacie in order to do that.

Hearing this, Levi laughs and states that Jack never fails to put on a show, only for Leo to call Jack selfish out of the blue. This prompts Levi to question what Leo is getting at, and so Leo screams angrily about how Jack is selfish for acting in such a way, as are Levi, Oswald and all the other Glens. Levi agrees, though he tells Leo that he can't refute his own selfishness either - reminding Leo of all the times he's thrown a tantrum because of the way things have turned out. Additionally, Leo willingly stepped down and allowed Oswald to take over as the acting Glen, showing that he lacks assertion. Levi explains that because of all this, Leo needs to stop and focus on what he wants to do rather than contemplating. Furthermore, if Oswald does in fact succeed in his attempt to alter the past, just killing Jack as he existed during the Tragedy would write a whole new history. If Oswald were to kill Jack, he wouldn't die during the tragedy and so Leo's chances of inheriting the title of Glen would greatly lessen. As Leo realizes this, he also realizes that if there's a future where he wouldn't be chosen as Glen, then in that future, Elliot may not die because of him. Though the idea seems ideal to Leo, Leo then remembers how Break had told him that no matter how far back he reached, a future for him wasn't there, as well as Gilbert telling Vincent that erasing his existence wouldn't make him happy because without Vincent, he'd be a completely different person entirely.

As the anger grows within him, Leo finally snaps and punches himself in the face as he attempts to calm his own thoughts; shocking Levi. Thinking of when Oz punched him because he believed Elliot would do the same if he could see Leo as he is now, Leo states that he doesn't need to be told, laughing at the thought of Oz intervening as if he actually knew Elliot. As tears pour down his face, Leo claims that if Elliot could see him now, he wouldn't simply punch him as Oz had said, Elliot would beat him until he was half dead.

Outside of the Glen subconscious, Oswald and Cheshire are drawn away from their battle as Vincent calls out for Oswald - revealing to Oswald that Oz, Gilbert, Vincent, Ada, Lottie and Dug had arrived to stop him. Seeing Lottie, Oswald is overcome with confusion as to why his own valets are acting against him.

In a flashback, Lottie tells Oz that she's not interested in fighting against him and his friends anymore. Knowing that Oz is going after Oswald, Lottie tells explains that if she and Dug are with them, they can follow Oswald's power because of their existence as Baskervilles. Additionally, both she and Dug know the area well, and that gives them the advantage that they need, finishing by urging Oz to come with them.

Seeing Vincent again, Leo remembers when Vincent had begged him to stop resisting his attempts to protect him. Filling with more grief, Leo apologizes to Elliot and explains that even though he constantly speaks ill of it, the world that they've grown to know is something precious to him. Though he's able to accept that he likely can't save Elliot, Leo admits that he doesn't want the world that Elliot was a part of to be rejected. Standing, Leo finally regains his strength and stands for what he believes in, insisting that he won't approve of the past being changed. Having come to understand Leo better after observing his reactions, Levi smirks and tells Leo that he is rather selfish, just like the other Glens.

Ascending the tower, Alice calls out for her past self as her memories from more than 100 years ago flood into view. At the bottom of the tower, Jack enters with the intent on further manipulating the Intention of the Abyss. Before he can begin his ascent, Oswald enters the tower as well, using the door frame to support himself as blood pours down from his wounds. Now completely detached from himself, Jack had Oz dismember Oswald's body, thereby ending Oswald's life and traumatizing Oz. As Oz starts to cry and scream over what he's been forced to do, the past incarnation of Alice is shown covering her ears as she hears the sound of Oz's agony.

Just then, Alice storms into her old room in the tower. Alice attempts to make content with her past self, but to no avail, which she'd expected - however she knows that The Core should be able to hear her, and so she makes contact with her instead. As The Core possesses Alice, a light shines throughout the tower, prompting Oz to send Gilbert to go help Alice while he continues to fight Oswald. Gilbert complies, and Oswald questions what it is that they're all trying to do. Elaborating, Oz reveals that they intend on returning the Abyss to its original state without altering the timeline, asking Oswald to lend them his strength in order to accomplish their goals.

(*) - Denotes that the character did not appear physically, but as a part of another character's memories.

Oswald dives into battle against Oz

Jack's literal description of himself

Jack reveals his true reasoning for triggering the Tragedy of Sablier 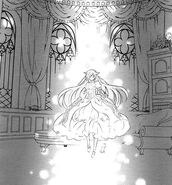 The Core of the Abyss emerges through past Alice

Community content is available under CC-BY-SA unless otherwise noted.